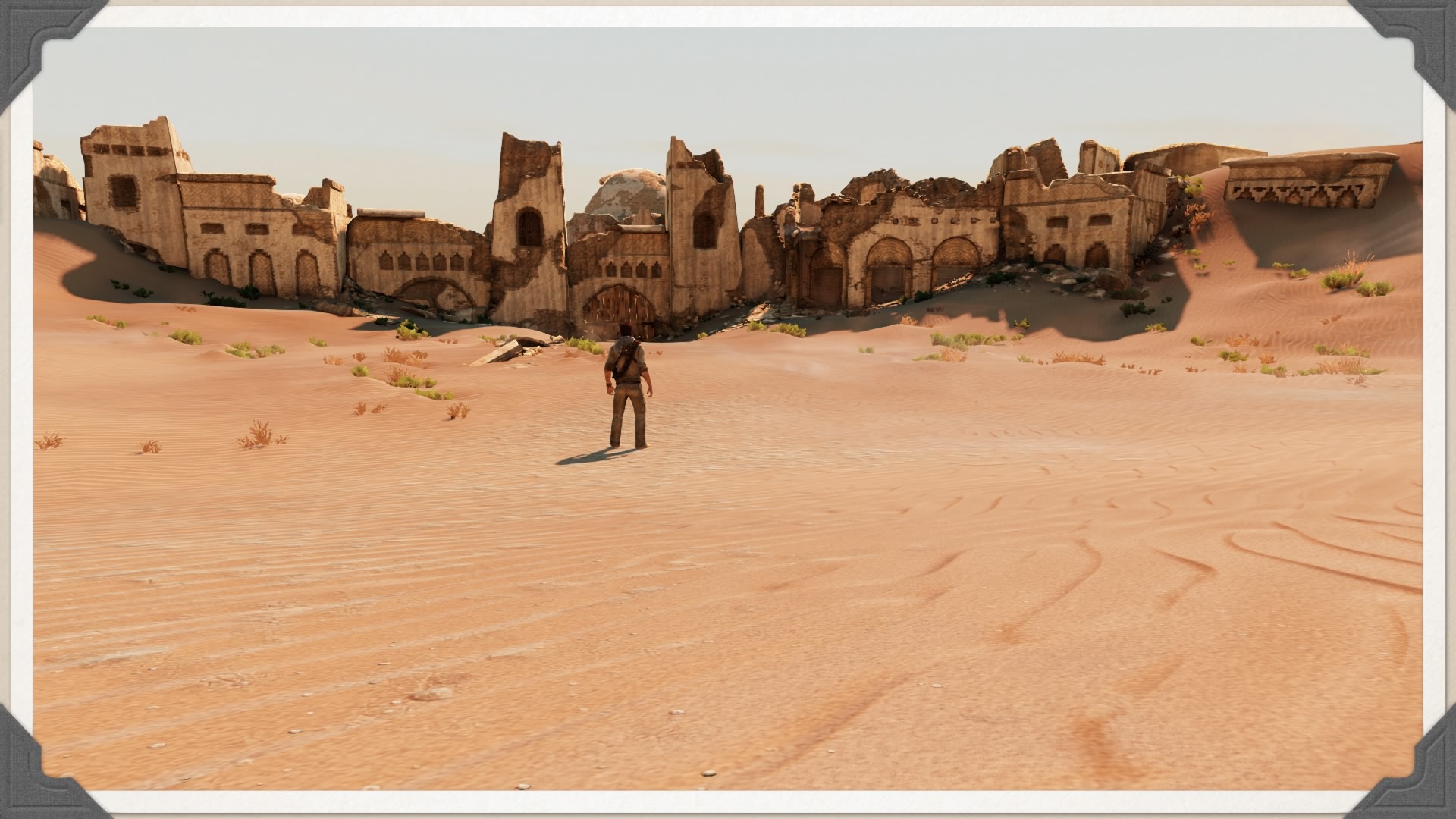 "I don't like sand. It's coarse and rough and irritating and it gets everywhere."
Anakin Skywalker​
And that's Uncharted 3 done and, unlike Resistance 3, I'm actually writing a review for this one, admittedly it's taken me a few days to build the motivation to write this because frankly I really don't have much to say about it that I haven't already said about the first two and I think that's the biggest issue across this trilogy; They're indistinguishable from one another. They built a formula and stuck to it, and barely changed it between releases.
If it ain't broke, don't fix it I guess?
But this has it's own set of issues, namely that it's become formulaic. I noticed this fairly early on, but the formula goes a little something like this:
I haven't played the fourth game, but I can almost guarantee you it'll play something along those lines.

How was the story?
Well you go on a search to find an ancient city hidden up in the mountains and along the way encounter some supernatural shenanigans. Whoops, that was the previous game, my bad.
Well you go on a search to find an ancient city hidden in a desert this time, and along the way encounter supernatural shenanigans...again. Yeah, so this story is pretty similar to the previous one, except instead of exploring the mountains of Tibet you're looking for another lost city, this time in a desert, an arguably far less interesting location.
Oh look it's a sand dune. Oh look, it's another sand dune. Oh look, it's a mirage.
Except this time, there wasn't really any supernatural shenanigans..sort of. There were a few points in the game where Drake would talk about ancient secret societies and occult practices, and so I kept expecting something supernatural to happen but it just never comes. The closest we got was one of the antagonists vanishing out of thin air and surviving a pointblank gunshot, and a latter sequence in the ancient city where you fight ghost people but that turned out to just be a hallucination. There was also a point whilst you're wandering around the desert where one of the Bad Guys starts talking to you, but I couldn't work out if this was just meant to be a hallucination or some other supernatural shenanigans.

"Remember to store your luggage in the overhead compartment"​
Combat is unchanged, as expected. For whatever reason, enemies felt like they hit harder this time round despite using basically the same weapons in previous entries.
Stealth was still there, unfortunately, but at-least this time we get a silenced pistol. Not that it makes much difference because sooner or later you'll end up getting spotted and having to just shoot it out. This time round, there's more melee sections which almost immediately lost my interest. They became so dull and tedious because all you're doing is pushing square, square, triangle and occasionally spamming circle. They're dull, slow, tedious and repetitive.
Still no sprint, but at this point I've forgotten why I wanted a sprint in the first place.
Cover is still janky at times. Sometimes you'll snap to cover when you don't want to, sometimes you'll completely leave cover when trying to move to another piece of cover, sometimes you just wont snap to cover at all.

None of the locations were particularly interesting to me, aside from maybe the underground section in the Arabic city (perhaps the first time I've liked an underground section) and one small section on the ship. You'll start the game in London and end up exploring some of the London underground, specifically some sort of underground building. I'm not sure what it was exactly, but it seemed like it should've been part of a museum. There where also some trains that i'm 100% certain where reused from the previous game. After London, you'll head to France and explore an overgrown mansion before the Bad Guys torch it. Now we're off to Syria and exploring a castle. Uh Oh, Bad Guy found us again and now he has the clue book, good thing Drake has a good memory. Time to visit some Arabic city (I forgot where it was). This was probably the second most boring section of the game. You're just wandering a city before finding the entrance to the underground section. The underground section was admittedly kinda interesting, especially with the statues that had a neat optical illusion where the heads would appear to follow you as you walk past them. I kept expecting them to come to life, but they didn't. Instead what we got was spiders, and then my opinion of this section changed. The spiders are just boring. They first appeared in France, then again in Syria and now here again. They hate light, so you have to swing a torch around to keep them away and then, before this section is done, you have to shoot them to scare them off. It was just boring and made me lose interest in that section. Then it's followed by a shootout and a hallucinatory sequence.

Time to visit another boring, uninspired location. It's a ship graveyard, seemingly in the middle of the ocean? This location doesn't make much sense, especially for what it's supposed to be. Surely a ship graveyard would be closer to shore not in the middle of nowhere? This is where I completely lost interest and just wanted it to end. This has to be my least favorite location across all three games. 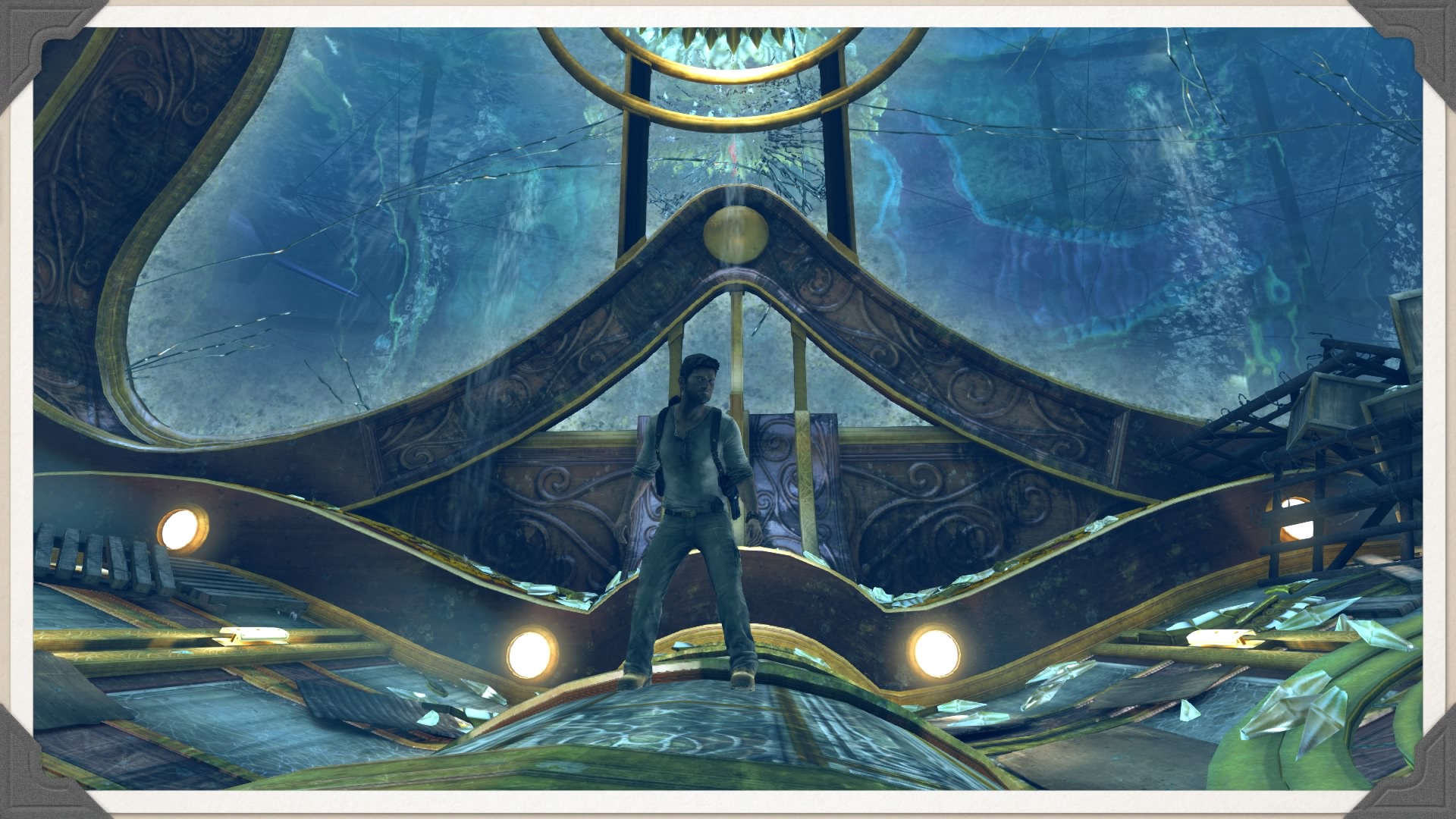 "Photos taken seconds before disaster"​
Luckily it's followed by my favorite section is what I'd like to say, but it's not. It's followed by a fairly average ship section where you're trying to find Sully in Bad Guy's cruise ship that he just has. It was forgettable, until it started sinking and then I thought it was alright. It reminded me of the Poseidon Adventure movie. Anyway, the ship sinks and Drake ends up back in the Arabic city before sneaking aboard the plane and we get to the one section that this game is most recognizable for. In-fact it's so iconic that they include it in the movie. It was kinda neat. Then it crashes and we get stuck in the desert.
Deserts are boring.
After an eternity in the desert we find the somehow lost city. That's made of marble and gold. And has trees. In a desert. That is somehow lost. Apparently satellites just don't fly over deserts (or mountains) in this world. And once again, Drake destroys this ancient city. Good thing he doesn't work in a museum then.
There was also a brief flashback to drakes childhood that was kinda okay. It was just average and just helps establish the relationship between Drake, Sully and the Bad Guys.

I suppose I should talk about the Bad Guys now. You've got Katherine Marlowe and some guy called Talbot as the primary antagonists, who know also happen to have had dealings with Drake and Sully in the past. They're leading some ancient secret society looking for the lost city to gain the hidden power or something. I'll be honest I didn't particularly care, they just weren't all that interesting. Katherine dies a really dull death, she just gets sucked into quicksand and that's it. Then we have a dull melee fight with Talbot before shooting him in the head and then the game just ends. I was expecting a plot twist or something but nope. Bang, he's dead. Game done.
There's also Ramses who serves as a very minor antagonist and is completely forgettable, aside from the fact that he just has a massive cruise ship as his base. 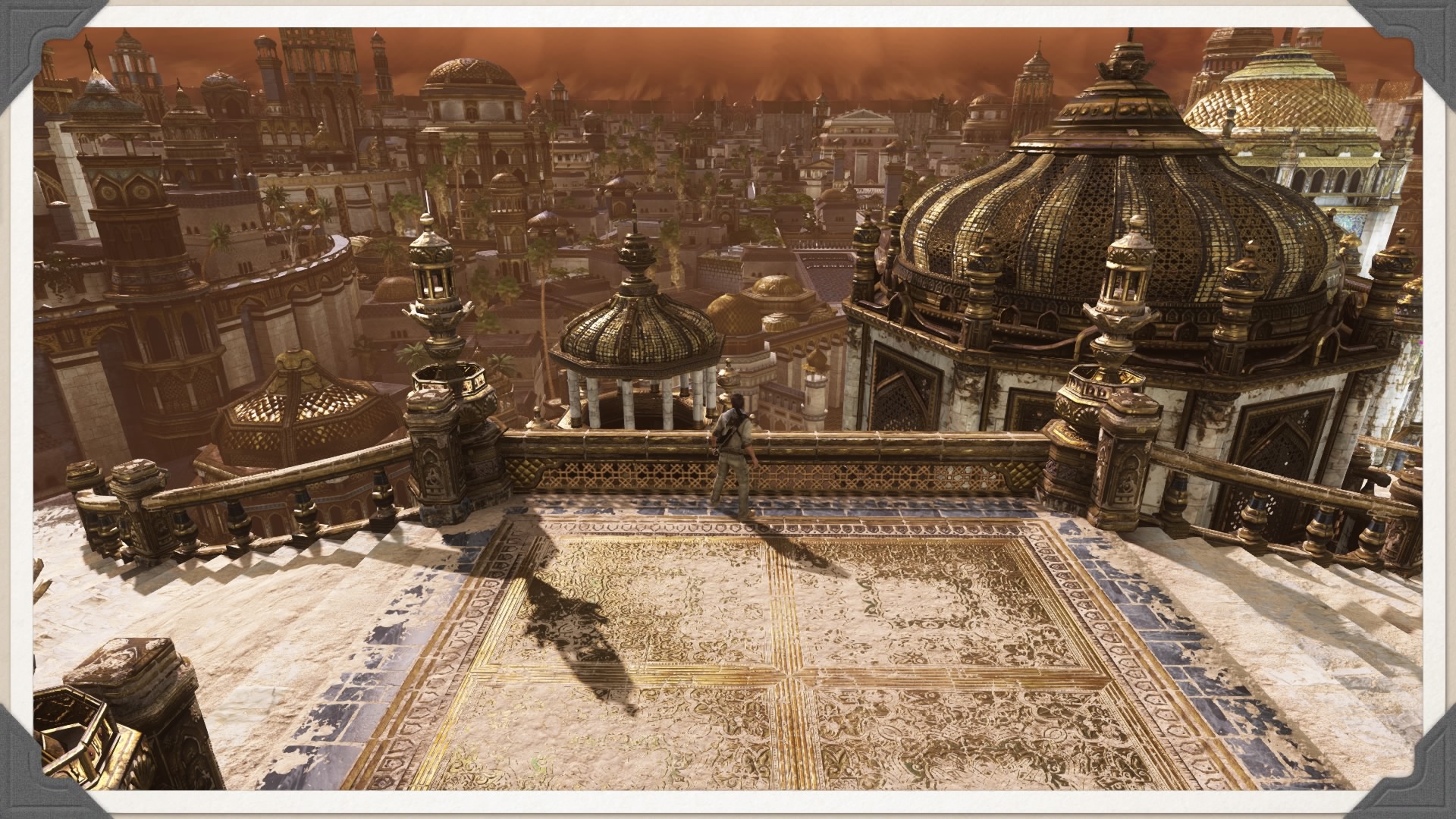 "A lost, ancient city. In the desert. That is undiscovered"​
Honestly, Drake's Deception is only marginally better than the first game but nowhere near as enjoyable as the second one. I remember thinking "great, I'm going to be spending most of the game wandering around a desert, my favorite setting" when I first started playing it, but I was pleasantly surprised to find that no, I'm not going to be spending most of the game in a desert. Instead I was going to be wandering around only slightly more interesting locations. The stand out point of the game was obviously the plane section, which was admittedly a pretty short and simple section. Aside from that the rest of the game was just average. So average that I just don't have anything new to say that hasn't already been said in the first two reviews.
5.5/10
God's in his heaven. All's right with the world

To me this is the weakest game out of all the 4, It was more of the same but at this point it was clear the guys at Naughty Dog were just bored with making another sequel for Uncharted on the PS3 but may have been contractually obligated with Sony to make it. If you compare it with the fourth game there's a huge difference and not just graphic wise, the devs put their souls into finishing Drake's story on a high note with Uncharted 4.

Battousai said:
it was clear the guys at Naughty Dog were just bored
Click to expand...

I don't blame them, considering they were also working on The Last of Us at the same time and probably just wanted to get this out so they could focus on The Last of Us instead
God's in his heaven. All's right with the world