Life is full of unpleasant or otherwise hard-to-face truths, and the creative works listed below I find have the biggest "truth bombs" of them all. Truths that people need to realize or stop ignoring and at least acknowledge and discuss. I'm sure some people would call this just a list of most edgy works, but before they disparage it any further, I would ask them to read on. This list is ranked in order of how important I feel each of the things talked about are. Also, just one note. I was about to add 1984, but that just barely doesn't qualify in my mind as, even though it is quite important, it's more a vivid nightmarish story told as a warning and doesn't really reveal any information or perspective I feel one wouldn't already naturally stumble upon.


Terrence Fletcher said:
Now are you a rusher, or are you a dragger or are you gonna be ON MY FUCKING TIME!?
Click to expand...

It's very interesting seeing people's reactions to this movie when they first watch it. Some say that Terrence was a fucking asshole and nothing more. Some say he was absolutely right. Some say he was right but he didn't have to be as huge a dick as he was. Regardless though, the truth that this movie reveals is that all skill and, really, power in general is all generated from sacrifice. There is no other way to create it. And if you want to reach the heights known only to a few, you must be willing to sacrifice greatly. It also brings to mind a law in the Lord of the Rings universe how great works cannot be duplicated because they require putting a part of your being into them. While this obviously isn't a literal law in reality, it does seem correct to say that all of us only have so much to dedicate in the creation of any power. It is entirely up to you to decide how you wish to dedicate your energy and your will. Be aware of the potential inside you and inside everyone.

Revy: The moral of the story is when you're living on the edge, that's all that matters to you 'cause that's all you've really got. Not everyone can get off on being normal.

Rock: If there is no Robin Hood, then why don't you BECOME Robin Hood? It's gotta be better than feeling sorry for yourself, crying about your hard life.
Click to expand...

This is a dual bomb delivered by both Revy and Rock at different times in the show. The first lesson, given by Revy, is to not judge others so quickly and to always question your own perspective. Yeah it's easy to look down on those stealing clothes and dealing drugs, but at the same time, have you been there and seen what they've seen and experienced what they had to struggle against? First world countries bring with them a very high standard of living compared to many other places, and it's sooo easy to forget just how much freedom and security we have, and if we let it, how that can be all taken away so quickly.

The second lesson given by Rock, while not a complete refusal of Revy's lesson, is rather the next step of it. Instead of giving in and falling to your selfish desires in such a dark environment, become the change you want to see. Break through and become that hero that people need and want. Wallowing in self-pity is not useful to anyone, least of all you. Become the rock that the waves break against.


Tyler Durden said:
Prove you're alive. If you don't claim your humanity you will become a statistic. You have been warned.
Click to expand...

While Fight Clubs goes over a lot of stuff, the movie as a whole is pretty much about getting away from the fake facades of modern society that we've been conditioned nowadays to accept. "Working jobs we hate to buy shit we don't need." When we conform, what are we really accepting here? Are we denying things about our inner selves that will hurt us later on? Sometimes conforming and uniting is good, but it's easy to carry it too far, and if we do, we become that statistic. Another meaningless existence that failed their own life.

3. Knights of The Old Republic 2 (from Kreia)


Kreia said:
It is the internal struggles, when fought and won on their own, that yield the strongest rewards.
Click to expand...

Once again like Fight Club, Kreia here goes over an awful lot. But once again, it can be summed up with not relying on other people, things, or even ideas for your power or beliefs. If you blindly rely on others, tools, or certain beliefs too much, it can enslave you and be completely counter-productive to what you want to accomplish. Instead, you should focusing on building your own knowledge, discipline, and strength up as much as you can first and then use everything else in your environment to augment what you already have instead of be the sole source of it. There's also a secondary lesson of keeping in mind what ripples you create across your life. Your actions will create other chain reactions. Do not be blind to this and have some wisdom. Just because something seems good on the surface doesn't necessarily mean it's the best thing, and vice versa.


G.W. A.I. said:
The untested truths spun by different interests continue to churn and accumulate in the sandbox of political correctness and value systems. Everyone withdraws into their own small gated community, afraid of a larger forum. They stay inside their little ponds leaking whatever "truth" suits them into the growing cesspool of society at large. The different cardinal truths neither clash nor mesh. No one is invalidated, but nobody is right.
Click to expand...

Disinformation and miscommunication have always existed since the dawn of humanity and they will probably exist LONG after every one of us currently reading this is gone. But nowadays, with the advent of the internet, new opinions and information are getting pushed out at such an accelerated rate that it's becoming downright alarming. Even worse, we currently have no established working way of filtering out all the noise, and there's only so much time in one's day. Ironically, the tool that was supposed to help facilitate communication like never before is now instead beginning to facilitate the exact opposite thing because of rampant misuse and bad habits. MGS2 is telling us that we need to realize just what we have on our hands here with the internet and to not misuse the power that we as an individual have. If we do, it could ultimately lead to a very grim future where biases are solidified in stone and violence breaks out everywhere.


1. Starship Troopers (the book) (from numerous)


Jean V. Dubois said:
A juvenile becomes an adult when, and only when, he acquires a knowledge of duty and embraces it as dearer than the self-love he was born with.
Click to expand...

Just a quick note. The book has little to do with the movie of the same name and I will not be talking about that. So, what is the book about? And why is it so damn high on the list? Well, because the book, I feel, lays out one of the best blueprints that we both as individuals and as a society should follow. There's a lot of talk about dystopias in media and what not to do, but we never talk about what a real ideal society should look like. The usual knee-jerk answer to this is Star Trek, but I feel Star Trek is inadequate in several facets in terms of addressing such a thing nor does it face certain cold truths that we all need to learn and embrace if we are to move forward as a species, regardless of one's religion, race, sex, origin, country, or culture. Now, fair warning. The book is really just a ~200 page rant disguised as a science fiction story. But holy hell is it one of the best rants you'll ever read in your life.

The book goes over a lot of stuff but I'll try to get all the highlights. The first is that violence is sometimes inescapable and is the final source of all societal power. Obviously, it should be avoided as the results of it are messy and sometimes unpredictable, but if that is not possible, then a society should not shun away from employing it in a disciplined and measured manner. The second highlight is that the right to vote or run for office (referred to now as a franchise) should not be given to just anyone who is a citizen, but instead, those who have voluntarily served their country (doesn't have to be military at all) in a grueling and unrewarding manner for two straight years. Again, service is completely voluntary and anyone can choose to do so, assuming of course that they are mentally sound enough to make that decision for themselves. The third highlight is that one truly grows up when they realize the true and full value of being responsible not just for themselves but for others and commit to that group responsibility to benefit not just others around them but their own lives as well as a result. When everyone benefits, everyone benefits. And when too many decide to be selfish, the social contract fails and we revert to monke.

I didn't include this one because I felt like this wasn't really big enough to count as a "truth bomb", but I still think about it every once in a while. Enough for it to warrant a mention. Fair warning that there is a spoiler for this comic. Not that it matters though I guess since the comic has been MIA since who fucking knows how long.


Basically, Erin is in a Final-Fantasy-esque universe and she's with these rebels who want to protect the earth from this evil corporation who wants to grind up these sentient "Crystals of Light" for soda. Turns out though, it was actually the Crystal's plan the entire time so they could possess everyone who drank the soda. And then a possessed blue-eyed Erin hits us with this. 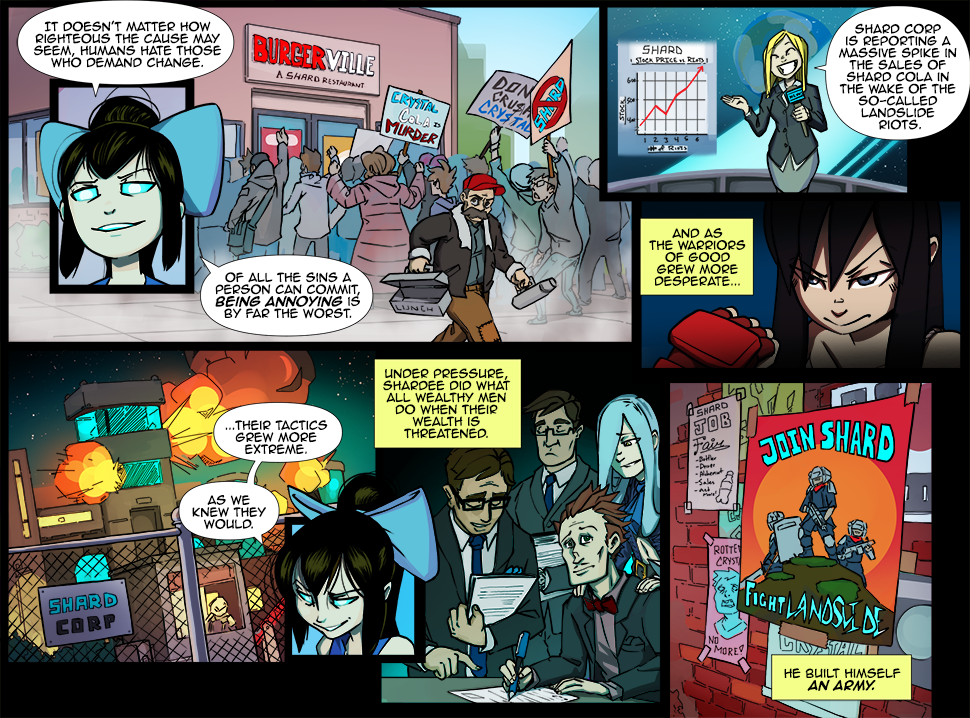 To be fair, when you got to Kreia I fully expected "APATHY IS DEATH."

Battousai said:
To be fair, when you got to Kreia I fully expected "APATHY IS DEATH."
Click to expand...

No, that was last week's episode.
-