And finally the bioshock series is complete (minus dlc). I have kinda mixed feelings towards infinite, and I think that might because it feels like its less bioshock and more generic shooter. The regenerating health and shield really made fights feel easy, because I could just duck behind cover wait till shield regens or Elizabeth throws me health and pop back up. Not that I thought that Elizabeth giving you supplies periodically was a bad thing, I just thought it made fights to easy. The next thing I'm going to complain about is the menu design. 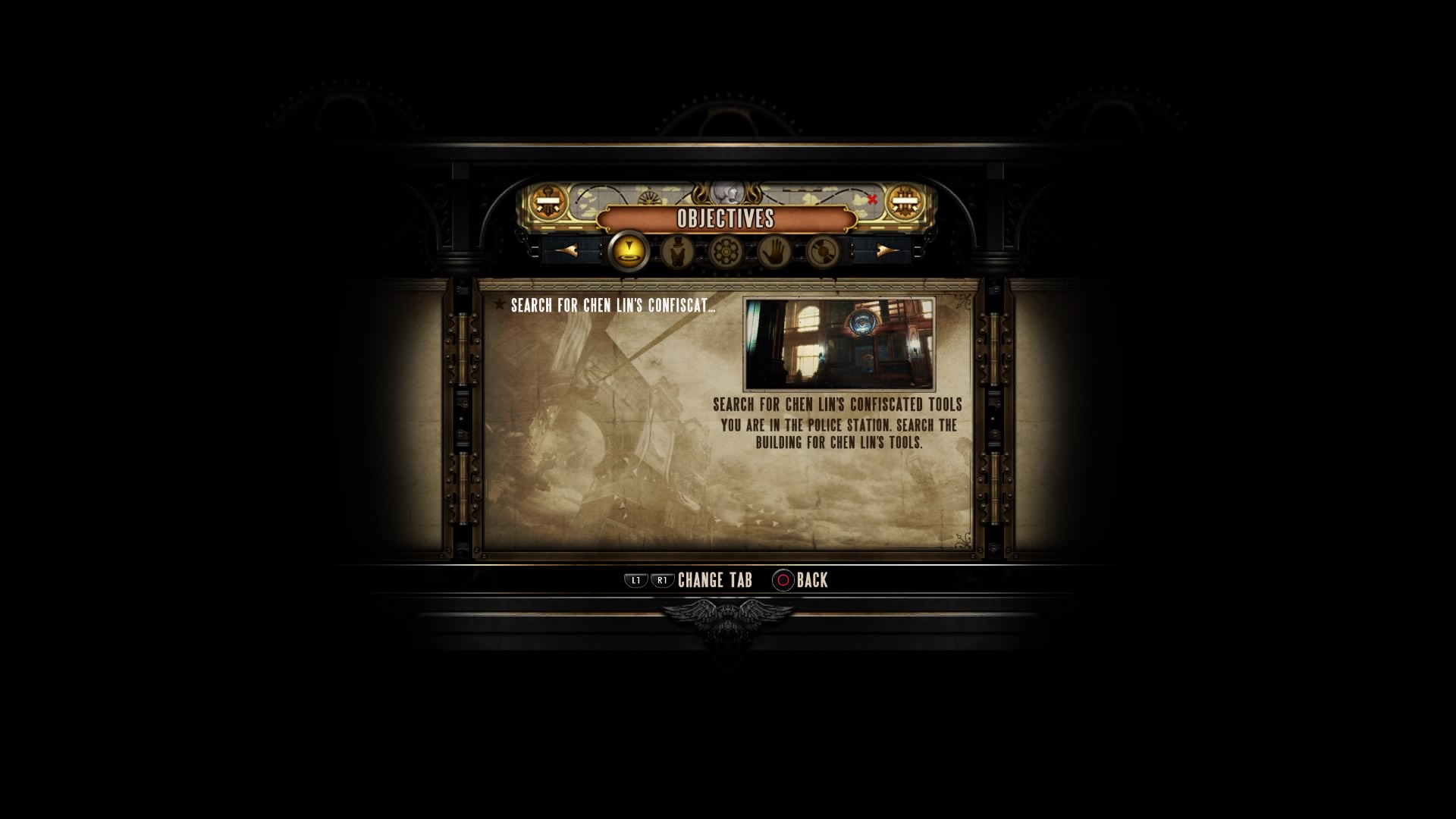 Why is so much of the screen taken up by nothingness? I thought it was such an unpleasant design, I pretty much never used it. I guess partly because I also never had much reason to. On a more positive note, I though it was interesting how the intro mirrors the first game too. Both characters are heading to a light house, opening a box containing instructions and a gun, the difference being one going up and the other down. Just thought that was kinda interesting.

I didn't like the weapons system this time round. The guns felt fine to shoot, but I didn't like being limited to only two guns at a time. The upgrade system was slightly better, but being limited to two guns at time made upgrading feel kinda pointless. Why upgrade something if i'm not going to be able to always use it? Also why did no-one seem to care that some guy was just walking around with a gun out? Vigors didn't make much sense till I had a quick read over their wiki page and even then they just didn't feel like they really belonged there. That aside they were kinda fun to use and I did like some of the new ones they tried, murder of crows being a personal favorite. I don't really have much to say on the gear system or infusions.

The new enemies were interesting, at-least in concept. In actual gameplay, not so much. Siren is the least favorite, I just thought she was annoying to fight. Her story though of being a being that's both living and dead and made from the emotions of Elizabeth was an interesting idea. Boys of silence are just security cameras, who summons groups of sponges. Again the idea of them being patients trapped in a helmet used as security, an interesting idea. Handyman were just sponges, but the fact that they're basically steampunk cyborgs is pretty neat. Then you have the motorized patriots that were just kinda 'eh'. Not fun to fight, nothing super interesting about them, so 'eh'.

The world is where it started to loose me just a little bit. The early game looked and felt like a floating city, but once I got to the factory section, specifically shantytown, I just had a hard time believing that all that was in the sky. There was too much verticallity, which feels like an odd thing to complain about especially since that actually adds to the mood and feel of shanty town, but it just didn't feel like I was in a city in the sky. Battleship bay is neat, but is the water flowing over the edge? If it is, then that's both a major hazard and a waste of water, especially given Columbia's location. There where multiple points where it felt like someone could fall off if they weren't paying attention. I know that's something kinda pointless to mention, but it was just something I was thinking about while moving through the game.

Overall, I though it was alright. A little 'eh' at points but still pretty good.
You must log in or register to reply here.
Share:
Email
Top