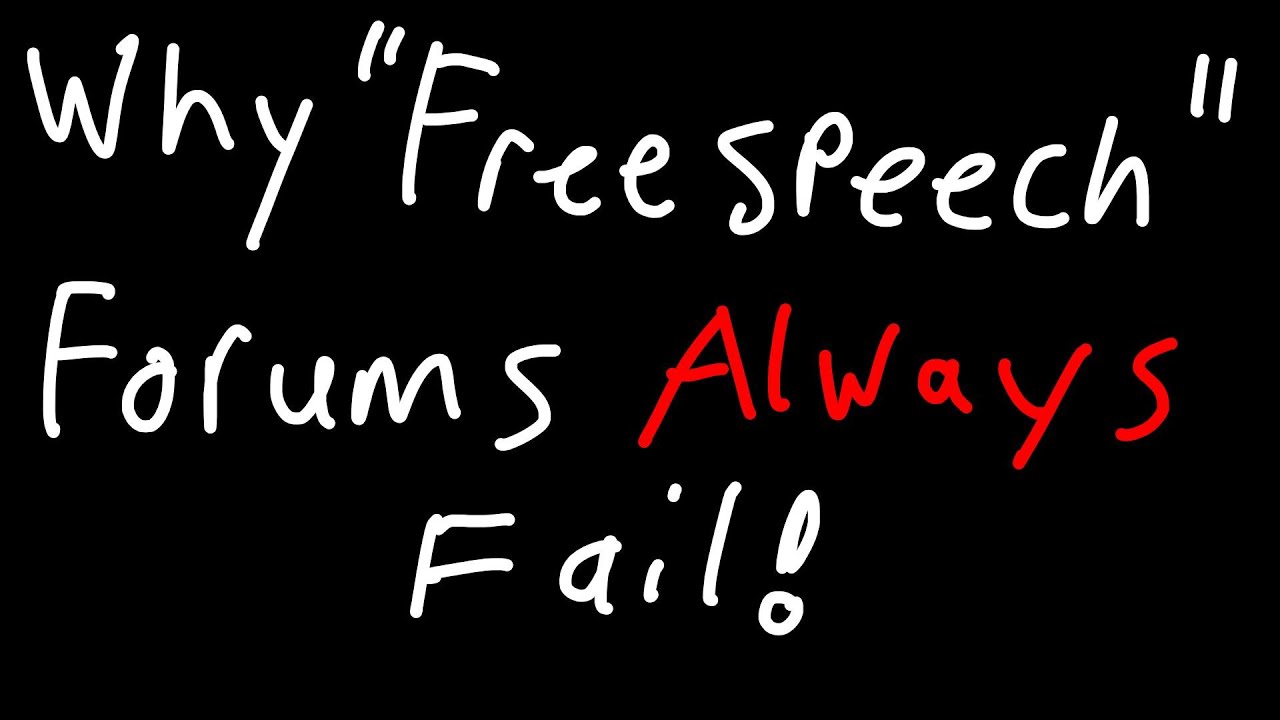 Creator's summary:
Why free speech forums, that are supposed to be for everybody, only end up attracting a certain type of person.

Let's say that you have the idea to create a "free speech" forum, a place where people of diverse opinions can come discuss and debate social issues, political issues, religion, phililosophy, all sorts of things.
You want to see people learn from each-other and challenge themselves by opening their ideas up to criticism. You want to see people change their minds and grow as people.
Unlike all those other sites, people won't be censored for having the wrong opinions. People on these forums will be free to speak their mind, and they will be judged on the content of their argument.
It's a forum for everybody to talk about everything.

Let's say that this is your grand vision, and in theory, that sounds great.

But in practice, what ends up happening?
Consider Twitter-alternatives like Voat, Gab, and Parler.
Those sites were supposed to be similar to your "free speech" forums, where all were welcome to discuss topics free from the censorship and manipulation of their alternatives.
But these sites end up with one type of person.
Your forums are supposed to be for everybody. So where is everybody.

Why doesn't the idea of a "free speech" forum have universal appeal?

-Part 1: What do people really want?

Let's walk through what happens if you were to launch your "free speech" site.

You set up the forums, and attract users, and you're open for buisiness.

And you can't punish them for that, censor their speech, or remove them from your platform, because this is supposed to be "free speech for everyone".

A majority of your users are going to answer that question with a "no", and then leave.

Didn't these users join your forums because they were interested in a place where everyone could express themselves freely?
Didn't they want their beliefs challenged, as they, in turn, challenge others?
What changed?

What sounded good to them in theory, ended up way too much to deal with in practice.

There's this thing called the Overton window otherwise known as the window of discourse, which illustrates what views are acceptable in polite society. The views that you can safely express are inside the window. The views you can't are outside of the window, and the window moves over time. What was once unthinkable is now popular, and vice versa.

People who seek "free speech" are usually people who have been banned from all the giant platforms, usually for expressing views outside of this window. So of course, when they come to your forums, they're going to spread the same views that they couldn't spread elsewhere.
The users that left probably prefer to remain inside the window. They want to discuss what's inside the window, what's allowable in polite society, and anything outside of that window is offensive to them.

What happened was that their beliefs were tested and pushed to the limit as they were exposed to the most extreme views a person could have, and they bowed out.

3.They have a different definition of "free speech" than you.
When you said "everything" you meant "everything".
They were thinking of "socially acceptable views"
It could be that they draw the line at different places, for example "hate speech" where you might not have a line at all.

Either way, they initially agreed with your idea in theory, but when push comes to shove and they find themselves confronted with the harsh reality of what your idea really entails, they change their stance and disagree.

Who are you left with?

Only the people spreading the views that drove everyone else off and the die-hard, thick-skinned "free-speech" supporters that knew what they were getting into.

Coincidentally, as you can see by this graph from the pew research center, republican conservatives are more likely to say that "people take offensive content they see online too seriously" and democrat liberals are more like to say that it is too often excused as not a big deal", and the same demographic also says that feeling welcome and safe is more important than being able to freely speak your mind.

This is why your site gets branded as an "alt-right" hangout, those are the sorts of people more likely to care about free speech. Conversely, the people who are leaving, most likely, lean democrat.

The people who remained would love it if the people who abandoned the place would come back. They didn't drive them out.
The people who left weren't censored or banned or harassed into leaving. They left of their own free will, but they would be welcomed back with open arms if they accepted the invitation.

It's a bitter irony. Allowing diversity of opinion ensures that you will never get it.

In the end, you become homogenous. You become a bubble, a silo, a "safe space", not because you wanted to be one, but because everybody else refuses to associate with you.

Part 2: what went wrong, and what can you do about it?

Well, obviously, you allowed in a Nazi, or a racist, or a bigot, and that's where the problem began.

You could simply not allow certain viewpoints to be shared in your free speech forum, but the more you do that, the less "free speech" you get.

Let's say you don't want to do that. What else can you do?

1. Warnings
Maybe when new users are registering, you put up a big sign saying "WARNING, HERE BE NAZIS", or something. You want to let potential new users know what they're getting into, so they aren't blindsided later.

Look at debate.org Debates and opinions are all structured in the same way.
There's a statement, and people can either agree or disagree with it.
Both are featured prominiently.

Debates are split up into rounds of one response each, where users can vote over who won.

It's just you, and a text box, speaking your piece either for or against a subject.

3. Ideal
Have an ideal. A common bond. Something that unites your users.

For example, have the forums be centered around a common theme. A hobby, a lifestyle, yoga, coffee, cats, for example.
Then, once you have that, allow them to talk about everything else on the side, in a separate space.
This is the gamefaqs method, where the main draw is video games, guides, and frequently asked questions, but they also have sections on politics, religion, wrestling, anime, social issues, current events, you name it.
If a user has a reason to be there, then they can tolerate and perhaps even overlook the offensive beliefs of other users. They're there for the coffee, primarily, not for the Holocaust deniers.
You'll have the best of both worlds, a diverse group of users with a strong "anchor" that won't easily let people sever ties.

By allowing people to express ideas that others may find offensive, you and your forums are going to be attacked.
They'll use "guilt by association" attacks and call you a nazi, or a bigot.
Your competitors will bad-mouth you.
They're going to try to scare people away from your forums.

You may not succeed, but at least you'll have tried.
The net is vast and infinite, and you can try again.
Hopefully, one day, there'll be a "free speech" alternative to the censor-happy tech giants.

Every individual impacted by censorship is an individual that learns why freedom of speech is important.
That means another potential user.
-

Uploading a video to the official Sanctuary channel about why free speech forums fail... 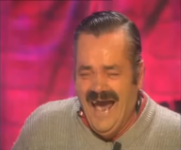 That's ballsy, Houseman. Real ballsy. But I like it.

Anyway, I do have a fair few things to disagree with in this video even though I agree with it at its core.

1. Many of the alternative sites you mentioned were never really free speech forums. Especially Parler. Some of them paid lip service to it but were grossly hypocritical and were just as censorious as Twitter, but against a different set of people. In terms of the niche that we at Sanctuary fill, we are actually pretty alone in both a great and depressing way. Mostly depressing though.

2. Attracting "undesirable" people only was actually a problem we ACUTELY had back when Sanctuary first started. Since they couldn't behave themselves in any capacity though, they got dumped hard. With that said, it could still happen that we attract a bunch more racists, bigots, neo-nazis (ACTUAL neo-nazis), and etc. While I don't actually care that they're on Sanctuary personally even though I obviously would vehemently disagree with their extreme views, what definitely does bother me about them is that they will make the forum look pretty unattractive to others as pointed out in the video. But here's the thing. If we can reach a critical mass of "normal" users, this will really start to matter a lot less, but until that point is reached, I hate to say it, but I feel I gotta curate users at least somewhat. An idea I had long ago to work against this was to temporarily turn the forums off and then invite others manually to the site until we reached enough users to launch again. This would have made sure we would get a variety of opinions while still avoiding getting a bunch of extremists when we're just starting out, but if I recall correctly, nobody really wanted to do that at the time, so it was shelved.

3. In this day and age, everyone has gotten too used to not having their beliefs challenged, so that is definitely a factor, but as the site becomes more and more popular, and as users see what can be accomplished as a community when we put aside our bubbles, this sort of mentality should really begin to disappear, which is one of the great dreams of Sanctuary. I've seen it happen though and I'm sure it can happen again.
Last edited: Apr 23, 2021
-

I like making videos about communities, community management, and the theory of it all, but I don't know who else would be interested in these topics.

There's no "community management" subreddit or anything. There is, but it's inactive and locked since 2016.
Maybe I could ask the reddit admins to give it to me since it's inactive.